Several things in the news recently have made me want to write again about Critical University Studies (CUS) – a discipline that has been given momentum in the UK by the USS pensions strikes of spring 2018. As I visited a number of campus rallies and teach-outs, I became aware of a real thirst for analysis of the UK and global higher education landscape. The pensions issue seemed to be a conductor for a whole host of other grievances about marketization, financialization, audit culture, management by metrics and the distortions of league tables and concern with university ‘reputation’.  These objections have spawned critique from all areas of the academy, from blogs by experimental scientists (Bishop 2013, Colquhoun 2016 ) to theorised analysis in social science (Burrows 2012; Holmwood 2011;  Petersen and Davies 2010; Hall & Winn 2018), to perspectives from literary scholars (Warner 2014; 2015; Docherty 2011; 2014; 2015). This work has now coalesced under the banner of critical university studies (CUS) which in many cases contains (but is not confined to) expressions of discomfort at changes influenced by neoliberal and market fundamentalist ideologies. There are now three book series oriented towards the field, Palgrave, Johns Hopkins  and Berghahn , a journal, LATISS http://journals.berghahnbooks.com/latiss , a university research centre at Roskilde, Denmark, as well as an early career researcher network at the University of Cambridge.   These are all positive developments, although it is wise to be cautious about the ‘institutionalisation’ of CUS, as Eli Thorkelson advises.

CUS as an interdisciplinary field of study was inaugurated by a special issue of Workplace: A Journal for Academic Labor edited by Petrina and Ross in 2014. This and other subsequent issues drew attention to the effects of neoliberal policies on higher education institutions and sought to identify connections between neoliberal economic and political developments, such as the subsumption of academic labour to profit (Hall & Bowles 2016),  and changes to conditions of work and academic identities in (largely) western universities. The principles of  CUS are informed by a paradigm previously established in Critical Management Studies (CMS) (Butler and Spoelstra 2014). This involves:

Some scholars in CUS would argue that the neoliberal structures of marketisation, consumerism, audit and league tables in UK universities lead to the perverse incentive to suppress academic freedom in those institutions (Morrish and Sauntson 2016; Morrish et al 2017). Some universities will act to defuse the force of government regulation and demands for surveillance and ‘accountability’; others will take advantage of the opportunities it affords. To this end, in the last decade, there has been a proliferation of workload models and policy portfolios: disciplinary, performance management, capability, sickness absence – all will have been revised and strengthened to fortify the managerial citadel.

So – back to recent news. As I started to write this piece, news came in about a tragic  death by suicide at Cardiff University in February. An inquest heard how Malcolm Anderson ended his life on campus early in the morning of February 19th. His close colleagues and his family testified to the amount of work Dr Anderson faced, including the requirement to mark 418 exam papers in 20 days.

I’m sure Cardiff will now make the usual noises about ‘lessons learned’, as Imperial College did after the death of Stefan Grimm in 2014.  I have no wish to be seen to exploit these cases for their harrowing personal details, but if we are to learn lessons, then we must know when such deaths, or long-term sicknesses occur and are attributed to overwork. It seems that the academic community did not know of Dr Anderson’s death until the inquest, some 3 or 4 months after the event.

When academics, both individually and collectively, demonstrate with evidence that workloads are too high to be safe, they are told to work smarter. When they complain that many forms of work are erased or undercounted by the workload model – dubbed ‘time laundering’ by Southampton UCU– this falls on deaf ears. When academics point to the incapacitating effects of management by metrics, they are told of a need to be accountable. We now see the consequences of this indifference and we wonder, along with another commentator on Twitter, how many more of our colleagues are just one more responsibility away from disaster.

It is insulting and abusive when universities charge academics with providing a flawless service to students, and then chisel away at the conditions and hours which would permit it to be accomplished. But the neoliberal academy requires the preservation of the myth of the coping academic and demands their enforced compliance, their subjection to surveillance, a strict curb on democracy, and the overarching impulse to protect revenue and reputation. Some scholars have even labelled the university as ‘bad boyfriend (Webster & Rivers 2018)  and Thesis Whisperer (2011). I would claim the working environment is simply toxic. As Sarah Amsler (2015) notes, there are consequences for the less able or non-compliant bodies; they will be refused and rendered aberrant. We see this already in the reaction of Cardiff University with its promise to ‘review the support available’ to lecturers who are struggling with workloads.  But that is not what the union members at Cardiff have been asking for; they have criticised the workload model from its inception and are demanding sustainable and humane workloads.

It is becoming clear that students are also experiencing intolerable pressure. The University of Bristol has been singled out, possibly unfairly, after 10 deaths by suicide in 18 months, because there are fears that coroners may not be reporting the full scale of cases.

When newspapers report a crisis in mental health, and universities declare a review of ‘welfare’ and ‘support’, this only serves to position the locus of responsibility on the individual and their lack of ‘resilience’. There are even online courses to help academics rehabilitate to the culture of punishing overwork, at the same time as indemnifying universities against legal redress. These courses are now becoming compulsory. Here’s an example email from a Russell Group university sent to staff. 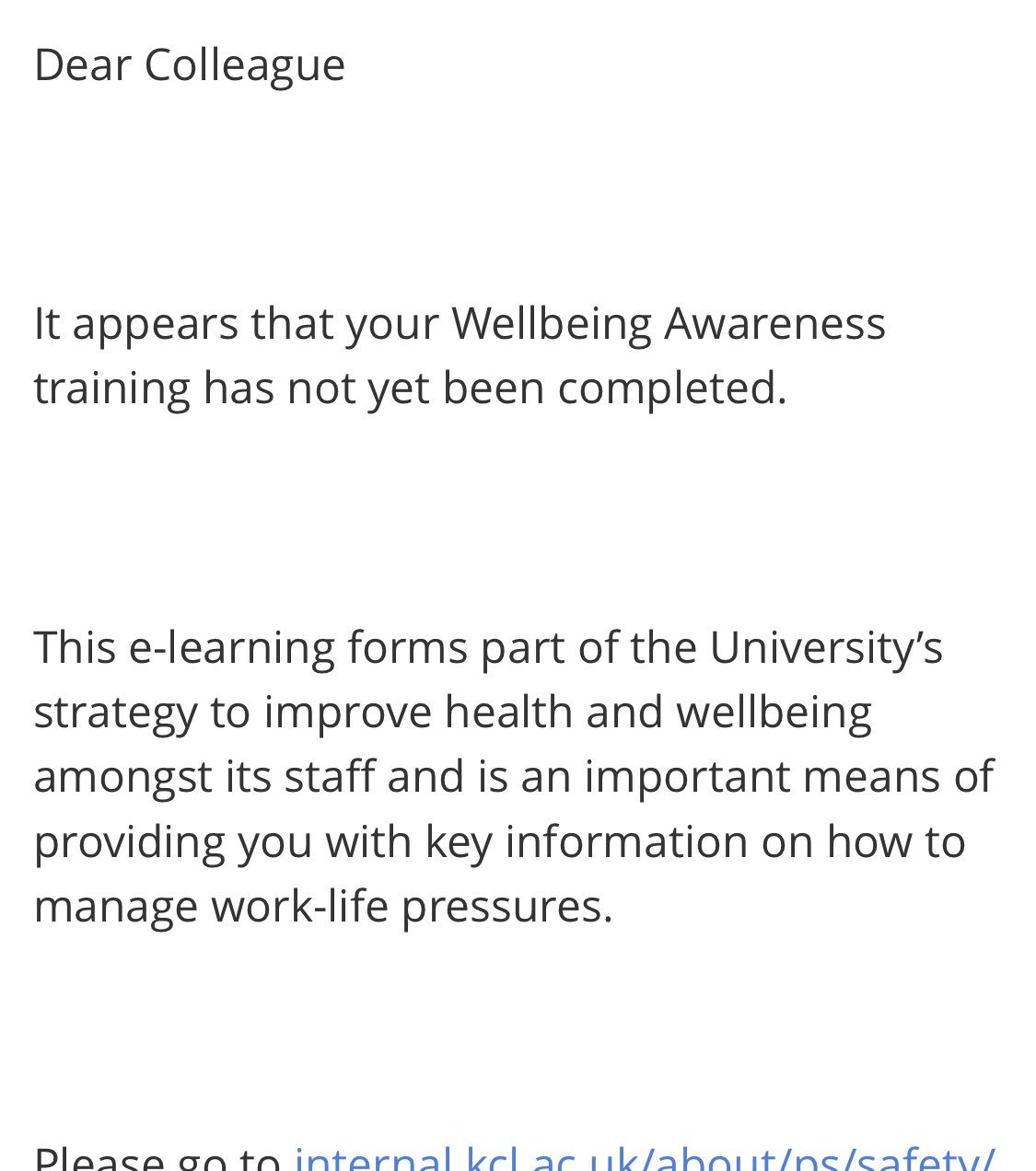 We need to mourn the individuals who are lost to academia, society and to their families, and then ask what is it about university structures and working conditions that has led to anyone’s death or serious illness. We should remind ourselves of a university’s legal obligation to prevent stress, not merely alleviate it. Please let us also think of the students who are left wondering whether they may have been part of the problem. They are not. They are the joy of the job. Yes, they have needs and make demands, but the problem is with universities which have seen fit to join a buildings and ‘student experience’ arms race without actually providing enough lecturers with the working conditions to fulfil the promise.

You wonder when university management will begin to take these issues seriously. They now need to be addressed and resolved, not ‘reviewed’ and ‘supported’. I marvel at the tendency of universities to fear internal critique, and yet their apparent appetite for critical opinion produced by private consultants and government number-crunchers (HESA, IFS, HEPI) is voracious, even when those studies hold up an unwelcome mirror in the form of league tables, retention figures, LEO data etc. Additionally, universities and other HEIs monitor and subscribe to online fora such as HEPI, Research Fortnight and Wonkhe. So why, when universities seem to wish to metricise every action and learn from every available data point, are they so averse to listening to their own staff?

So what, then, awaits the academic employee who seeks to publish their analysis of the effects of academic capitalism, the damage of outcomes-based performance management or the ascent of managerialism? As many will know, I have some familiarity with this, documented here and here.

So with the benefit of experience, I would like to make this observation about the relatively new field of Critical University Studies. It occurs to me it is placed in an unhelpful paradox – one which is not faced by its sibling disciplines of Critical Business Studies or Critical Legal Studies. The paradox is this – even if making a general observation about universities, the scholar seems to imply criticism of the institution in which they work. This is made exceedingly clear in a thread of tweets by Eric Lybeck on  May 30th 2018.

How does one criticize a tendency to undermine academic freedom via social media policies without being able to offer an example from one’s own experience? The academic wishing to draw on expertise and knowledge must, it seems, be pitted at odds with their employer and exposed to considerable personal risk.

To digress just a little, though the issues are connected, we can recognise a pattern identified in a recent piece by Carolyn Gallagher  in which universities seek to distance themselves from academic employees who engage with controversial topics in public debate, and are attacked in those public forums after doing so. Sometimes powerful state funding agencies or media commentators call for the dismissal of the academic. This can lead university managers, many of whom prioritize ‘reputation’ over any wider commitment to scholarship or to a public beyond the university’s walls, to denounce or even discipline the employee, even while proclaiming their right to academic freedom.

In the UK, academic freedom, and the freedom to criticise one’s own university in public, or the system generally, is enshrined in law, and most university statutes and articles of government reflect this. However, in 2017, academic freedom became a moral panic in the UK (UK Government Dept. for Education 2018), and students and academic staff were blamed for undermining it with alleged excessive regard for trigger warnings and safe spaces. However, in reality, it is university managers who display rather different thresholds of tolerance for critics of higher education policy and practice. Too often for university managers the issue is never about academic freedom; it is cast as being about civility, or they will shelter behind  policies  on ‘dignity and respect’; or they will claim ‘reputational damage’.

CUS is very much the canary down the mine of academic freedom.  The process I endured prefigured the kind of despotic capriciousness we associate with the Donald Trump zeitgeist. In an era of weakened trade unions and managerial unaccountability, vice chancellors must accept that, for academic freedom to thrive, requires very thorough protections for those scholars who offer a challenge to ‘the university’ from within. There is a very simple resolution, of course, and it already exists. Universities must observe the safeguards enshrined in law, and they must become more democratic and open to scrutiny from the members of the academic community who constitute them. As Judith Butler wrote in the Chronicle of Higher Education last month, “Censorship is always an indirect confession of fear. The censor exposes himself as a fearful being. He fears speech and seeks to contain it. His fear attributes to his opponent’s speech a power that it may or may not have”. For the sake of scholars facing oppressive and hostile structures, let our speech be free and let it be heard.

Hall, Richard and Bowles, Kate. 2016. Re-engineering Higher Education: The Subsumption of Academic Labour and the Exploitation of Anxiety. Workplace, 28. 30-47.

12 thoughts on “Can Critical University Studies survive the toxic university ?”