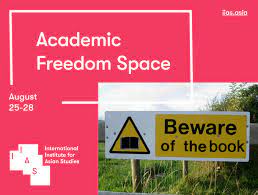 Yesterday I was invited by the International Conference for Asian Sudies to particpate in one of their daily panels called Academic Freedom Space. The title of the panel was: Implications of neoliberal-inspired policies for knowledge creation and education. More conferences should do this, especially as we watch the threats to academic freedom mount across the globe. Below is my contribution to open up the discussion.

As institutions of higher education have been privatised, financialised, marketized, neoliberal policies have seen all decisions being handed over to the market. Neoliberalism has unfolded in lockstep with managerialism, and this has been the case in the UK from a much earlier period than may other countries. Since 1992, in universities, democratic, participatory governance by academics through senate committees has been superseded by managerial practices of top-down authoritarian and remote decision making. It has led to an epidemic of bullying – officially prohibited by institutional policies, but (as with Governor Cuomo of New York) concealed, defended and normalised by a cadre of complicit underlings. The tolerance and defence of bullies in universities derives legitimacy from those who believe that authoritarianism is a leaner, more efficient mode of governance. There are parallels in current debates in the West about the burdens levied on the economy by the numerous and cumbersome steps required by consensus. In the US, we are beginning to see the championing of Victor Orban by those on the right who see virtue in his form of post-democratic government which cements its appeal with anti-feminist, homophobic and racist messages.

This deterioration has been mirrored in universities where we see the faculty being subjugated by spurious disciplinary procedures and the prohibition (both formal and implicit) of trade union activities. Actual faculty democracy and discussion are replaced by sham ‘consultations’ repurposed as relay stations for on-the-hoof policy making in the name of ‘agility’.

In some countries, universities are subject to state control, but in many more, autonomy is granted in name only. In 2015, the Japanese government required universities to reform and divert resources away from arts and humanities towards sciences. Brazil, Turkey and Hong Kong have seen the state extend its control into university curriculum, freedom of expression and suppression of dissent. In Greece, a special police force has been assigned to universities to surveil and counter left wing activism. A more propagandist approach was taken by the Trump administration in the US with its war on wokeness and campaign against critical race studies. This has been emulated in Australia and Great Britain, driven by an anti-intellectual media. In the UK, legislation regarding academic freedom has been amended to apply only to those interventions from academics which are judged to be within their area of expertise. Who makes that judgement? Not academics, but their managers. A Regulatory Regime (see August 9th blog) has required universities in the UK to refocus on those areas judged to be of service to the economy. And in contravention of the evidence of graduate employment, this is spelled out as being science and technology subjects, acronym STEM.

Marketisation of the higher education system in the UK has led universities to construct students as customers, degrees as products and staff as overheads. Academic disciplines which can be made to appeal to 18 years olds will thrive, while those which cannot, will be rapidly dispatched, regardless of the value of research or other societal contribution. Staff can only redeem their indentured servitude if they bring in external income in the form of research grants or industry contracts which themselves are subject to government prioritising of economically valuable areas. Now that publishing our own work has to be paid for by article processing charges (APCs), it is more and more likely that only the favoured subjects will be supported by universities. These are structural constraints which have a heavy impact on academic freedom.

The neoliberal agenda and managerialism have led to an emphasis on calculability. Staff are subject to performance management mechanisms in the form of research metrics: number of publications, citations, journal impact factors, H-index- academics may be confronted with these metrics in an annual review and found wanting. The value of their teaching is now to be assessed by a measure of what their graduates earn, relative to graduates of the same discipline at other universities, or graduates of other disciplines at the same university. There are so many ways to fail, and so many metrics to optimise. And just to make things interesting, they change all the time. One year it is student satisfaction which is the criterion for comparison; the next it is drop-out rates; the next it is employment in highly-skilled professions. Who would risk placing curiosity or freedom of enquiry at the top of their personal priority list?

Universities have become much more authoritarian institutions and concerned with preserving reputation at all costs, less any perceived scandal interfere with student recruitment. Even when we point out racism, sexism and homophobia on campus, we may be shunned by university leaders who prefer to genuflect before the government’s obsession with campus politics, ‘wokeness’ and policies regulating student and staff expression of critical opinion.

There are some indicators that this autocratic tendency has accelerated since the pandemic and there is now an urgent need to resist its spread.

At the University of Leicester, scholars of critical management studies have been selected for redundancy on the basis of titles of their journal articles, or sometimes just the titles of the journals themselves. This is the most egregious example of ideological cleansing and a breach of academic freedom by a UK university. But there are other ‘softer’ examples, particularly of university management teams anticipating a future in which the arts and humanities may lose funding and instead, as per the preference signalled by government, are re-orienting their universities towards science, engineering and medicine (Aston, London South Bank).

Let us now turn to the attack on academic tenure, which is surely the mainstay of academic freedom. The UK allowed this to be stripped from universities in the early 1980s. Other countries such as the US have merely supplanted tenure track posts with precarious ones. And now, some mainly Republican-voting states are introducing post-tenure review (established in Wisconsin, under consideration in Georgia). Given the threats levelled, especially at public institutions, this can only be read as a deliberate attack on autonomy and academic freedom to pursue topics which the government finds disturbing or inconvenient.

Just as Orban’s and Bolsonaro’s first targets were gender studies lest women lose sight of what these governments see as their role in society, these have also often been the first targets in universities and in government expressions of dissatisfaction with higher education. They are swiftly followed by incursions into social science and arts and humanities departments. In the UK, the axe has fallen on large numbers of modern language departments and these subjects are now the preserve of highly selective universities, and increasingly of private high schools.

In the UK, you have even this limited degree of academic freedom, only if you check off all of these:

Academic freedom is not a restricted commodity. It is not on ration. It is the entitlement of all academics for the very good reason that it is a pre-requisite for democracy and free enquiry. We cannot all be superscholars, but we all need to take our teaching in new and different directions. Without time and freedom, we cannot even do that.

It is essential to organise to fight back against the diminishing of academic freedom and to defend critical scholarship wherever that is represented across the range of subjects. Unless academics are free to follow their curiosity and open themselves to interrogation and critique, the well-funded haters and the authoritarians can continue to destabilise democracy itself.