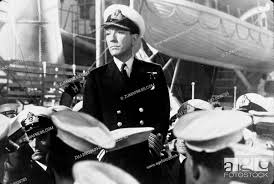 In March 2020 we learned the paradox of social distancing. As we offer others the caring gesture of stepping into the street to maintain a two meter gap, they thank us, and each acknowledges the other’s humanity.

Distancing has pervaded our workplaces as many are now working from home. As universities move to online teaching, we wonder how social relations will be changed after the virus has left the scene. None of us quite know what will emerge at the end of this period. A thoughtful piece from USS Briefs  has initiated a conversation about possible futures. The only certainty is it would be misguided to act “as if the world in which we drafted our syllabi and exams is the same one when we begin marking, as if we could carry on working just as before”. I predict that face-to-face teaching will be transformed to a greater extent than online practice. Both students and staff will have had time to reflect on what, exactly, they value about the experience of collective learning and living, and what they would like to change.

Along with the NHS and the BBC, universities have garnered new appreciation as institutions which serve the public good. Former minister of state for universities, Chris Skidmore, has been tweeting out regular good news, with current incumbent, Michelle Donelan joining in more recently. Some notable contributions include: epidemiologists at UCL and Oxford have advised the government by modelling the likely spread of COVID19; the universities of Durham, Salford, Nottingham and Nottingham Trent University have donated supplies and specialist testing equipment to the NHS; King’s College, London has developed a hugely useful symptom tracker app which will collect vital data; and the UCL Institute of Education has made available a bank of resources to support children’s online learning.

Another optimistic development is that many universities are realising that this may be the time to build bridges with staff. Working from home with students at a distance, developing online courses with just a week’s notice, these changes have required a huge effort of learning and application from many academics. They are finding that teaching online involves much more than just uploading lecture videos and learning materials to the VLE. It means shifting to a whole new pedagogy and there has been little time to prepare. The COVID19 campus closures followed hard on the UCU 4 Fights strikes. Goodwill was scarce amid a commitment to ongoing action short of a strike (ASOS). Many UCU members have welcomed the way some universities have sought to alleviate the financial pressure (particularly acute for staff on precarious fixed-term or zero hours contracts) by spreading out the pay deductions resulting from strike action. Newcastle, King’s College, St Andrews, Birkbeck, Southampton and Ulster are among those universities where managers have waived or suspended strike deductions. King’s College and Cardiff Met have also pledged to support hourly-paid and fixed-term staff. These and other accommodations have been documented by Andrew Chitty in a sort of informal league table of university decency.

Other universities have extended consideration to the personal circumstances of staff in this unique situation of home confinement. The VC of the University of York wrote “I want to reassure you we understand additional responsibilities that many of you now have…Do work when you can”. King’s College has been equally understanding: “if you have young children at home when the schools are closed or have other caring responsibilities and are working at home, we know that you may be unable to commit to a full day of work. We understand that and thank you for your best efforts. You do not need to take annual leave to make up any perceived difference. Do what you can, ask for help and take care of your family. If you are unable to work at all because of caring for dependants, please talk to your line manager about dependant’s leave”.  Meanwhile, Newcastle University has offered a paid four-day week to staff in April.

But here let me channel Captain Kinross (played by Noel Coward) as he addresses the ship’s company in the 1942 film In Which We Serve. “Nearly all universities performed as I would expect; however, some didn’t”. There is a disappointing roll call of institutions which still seem to prioritise the settling of scores while remaining deeply wedded to the notion that full productivity must be sustained, even as the REF research audit has been postponed. The Universities of Leeds, Reading and Liverpool have insisted on deducting all strike pay in one month, while Leeds has suggested that staff should use annual or unpaid leave if they face caring duties during the lockdown. ( Update, University of Liverpool UCU have now confirmedthat strike deductions have been postponed until May or staggered for those who require it). Members of higher education’s casualized workforce were among the first to experience brutality when news on Twitter reported that Sussex University will be terminating all temporary contracts. Newcastle also chose the first week of lockdown to issue redundancy notices, with apparently no word of recognition of the extreme misfortune of receiving this when there is no possibility of pursuing other opportunities in higher education for some months. In this case, ‘kind regards’ must be received with very bitter irony. 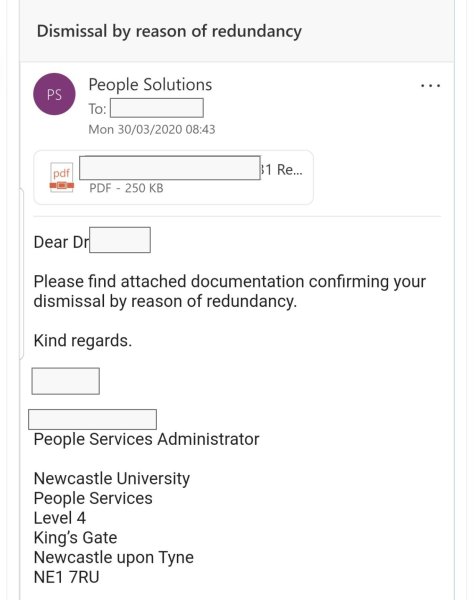 The horror of this communication was not lost on the students of some of these young, precarious lecturers who made clear how much they appreciated their efforts. This letter to the Vice Chancellor, Chris Day, is so impressive it is worth publishing in full. 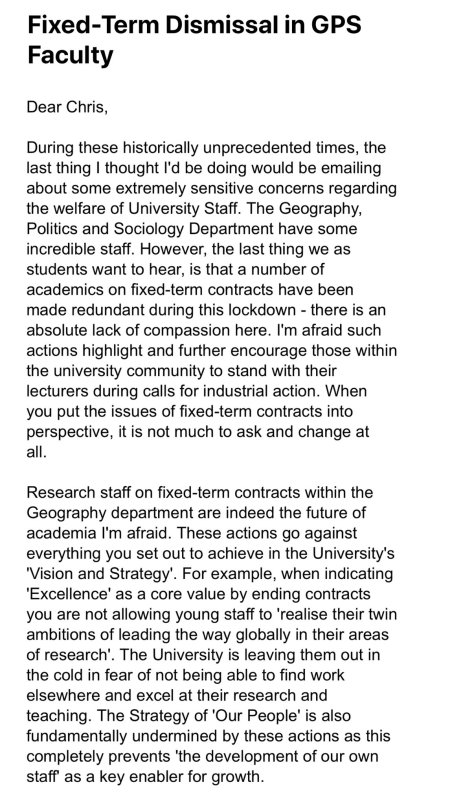 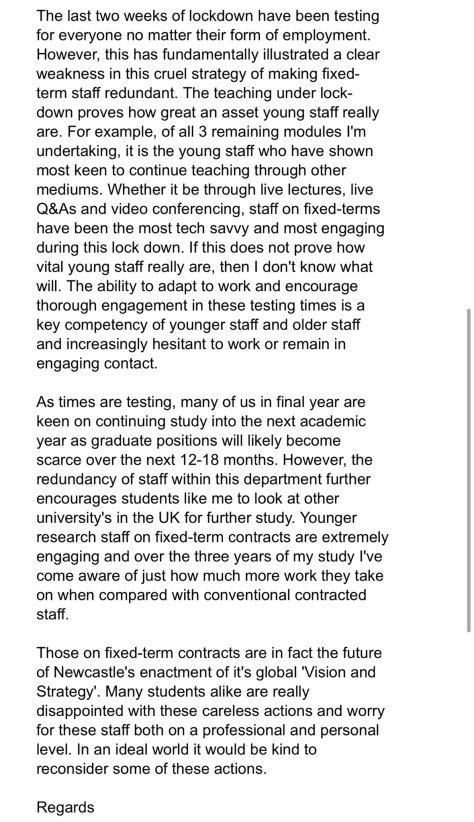 The University of Sheffield has taken a helpful approach to casual workers, setting out a range of actions designed to sustain these workers through the crisis. Sheffield UCU COVID19 negotiating team, as well as long-term campaigning, have achieved a good result here.

Many of us worry that some universities might seize a moment of ‘disaster capitalism’ to carry out ‘restructures’ or might opportunistically recruit from a reduced pool of students, thus impoverishing other institutions. The logistics of funding universities, both teaching and research, may require some temporary measures – even a one-off block grant. Where new private providers figure within such a policy may prove controversial. Chris Skidmore today is asking for a doubling of research QR money over the next five years

Centralised policies on allocating new students may be required this year and there is now a debate over a return to the student numbers cap if some universities are to avoid financial oblivion, and reduction in opportunities for the 2020 entry cohort. Even more destabilizing is the likely collapse of recruitment of international students leaving some Russell Group universities very exposed.

When universities do gear up for the new academic year, whether that should be in September or January, they will require a spirit of common purpose. The institutions which succeed will be those that inspire confidence among staff and students. Their leaders will have offered support and kindness in harsh times. They will be patient and understanding as people recover their mental and physical health. Perhaps universities will abandon concerns with league tables and competition, metrics and toxic work culture, and recognize they exist as institutions of teaching and research ‘in which we serve’ the public good.

18 thoughts on “In Which We Serve: Universities in Lockdown”