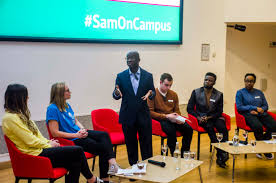 A version of this article first appeared on *HE: Policy and markets in higher education, published by Research Fortnight on 5th July 2018.

It might have been mildly embarrassing for the Minister of State for Universities, Science, Research and Innovation, Sam Gyimah, to have to retract his accusation a couple of weeks ago, that a lecturer at King’s College London had been reported for spreading ‘hate speech’ during his history lectures, but the evidence was against him. Unfortunately, like some more of Mr Gyimah’s more volatile claims on stifling of freedom of speech in universities, this had proved impossible to verify.

However, rather than being reassured that Gyimah has had to back away from citing unsubstantiated anecdotes, perhaps we should be concerned that this behavior fits a pattern in modern politics, of pushing at the boundaries of credibility knowing that some fabrications will stick if they are repeated often enough. In this case, academics, universities and freedom of speech itself are all damaged by these allegations.

Sam Gyimah has styled himself as rather a champion-protector of freedom of speech on campus, and has already hosted a free speech summit for universities, urging leaders to stamp out ‘institutional hostility to unfashionable views’ and to take stronger action against ‘safe spaces’ and ‘no-platform’ policies that he alleges have appeared on campuses.

It is perhaps convenient that the minister has overlooked the actions of a member of his own party whose partisan interest in the university curriculum recently caused controversy. Last October, a few months prior to Gyimah’s appointment, Chris Heaton-Harris, MP wrote to vice-chancellors asking for the names of any professors involved in teaching courses in European Studies which might have a bearing on Brexit. He suspected that such courses were being taught from a point of view which might lean towards Remain.

It was probably a futile gesture designed to draw attention to some politicians’ belief that all academics are left leaning. This fear seems to have its origin in the ongoing US culture wars, and a recent study which found that 60 percent of professors identify as liberals, while a mere 12 percent identify as conservative. Despite allegations of ‘group think’ and lack of political diversity, there is no real evidence in the UK, apart from anecdotes such as the one dismissed by King’s, to indicate that political orientations translate into bias in the classroom. There is nothing to suggest that issues like Brexit are taught in a way which is not entirely evidence-driven, nor is there anything to suggest that students are not free to argue with their lecturers.

Nevertheless, Sam Gyimah has kept his attention on this issue and fully embraces his new ministerial role with a sharper focus on students than any of his predecessors. He does occasionally, though, give the impression that, far from being even-handed, he is rather invested in being minister primarily for conservative students. He has openly stated that his ‘Sam on campus’ tours have been intended to bestow on the Tories the kind of appeal elicited by Labour politicians, and especially Jeremy Corbyn.

The first concerns about a new kind of partiality within government were raised when, on January 1st 2018, it was announced that provocative conservative commentator, Toby Young, would be serving on the board of the Office for Students, and that Ruth Carlson, a hitherto unknown name, had been selected as the board member for the student experience when, according to a written answer from the Minister to Kevin Brennan, MP,  she had not even been among the original applicants considered appointable. Her chief virtue seemed to be that she had no connection with the National Union of Students. Even though Young resigned, the episode led to accusations that the new Office for Students was little more than an office for state control.

These developments are all the more disconcerting if we consider some recent precursors in the US. In February 2017, a state senator in Iowa introduced a bill into the state’s legislature. The bill, SF 288, aimed to ensure that ‘hires’ – and this targeted just new academic recruits – at the state’s universities should reflect equal proportions of liberals and conservatives. The purpose of the bill, according to its sponsor, Republican state senator Mark Chelgren, was an attempt to counter the ‘liberal slant’ at the state’s three public universities, and its wording specified the exact proportions to be achieved:

Notwithstanding debates in the US about affirmative action for under-represented groups, this seems like an unnecessary privileging of a group which does not lack political clout.

UK readers may be wondering how university hiring committees would be made aware of political affiliations. The answer lies in the voter registration processes of many states in which voters need to register with a particular party – Republican or Democratic – if they wish to participate in that party’s primary elections. The bill specified that those records would be made available to the state board of regents which governs the state-funded higher education institutions. However, the measure was opposed by the board of regents and the bill failed to proceed.

At around the same time, a Republican state senator in North Carolina, Ralph Hise, was tabling a similar measure in his state legislature, requiring faculty members across the UNC system to “reflect the ideological balance of the citizens of the state,” plus or minus two percentage points.

So, when a minister alleges political bias in universities, or condemns political activism within them, or when the Office for Students threatens to fine universities for alleged failure to protect freedom of speech (even as they must abide by the Prevent Strategy), this echoes the more extreme political interference attempted in Iowa and North Carolina. Even the sanctions resonate with Office for Students discourse. This from North Carolina sounds familiar:

“If the accreditors conclude that something is amiss, they could sanction individual UNC campuses, which would endanger the ability of those campuses to attract research funding, facilitate financial aid, and compete nationally and internationally for faculty and students.”

And indeed, we see on 20th June, a tweet from the Office for Students clearly stating a threat to intervene in universities’ pay structures when they deem a vice chancellor’s pay to lack justification. 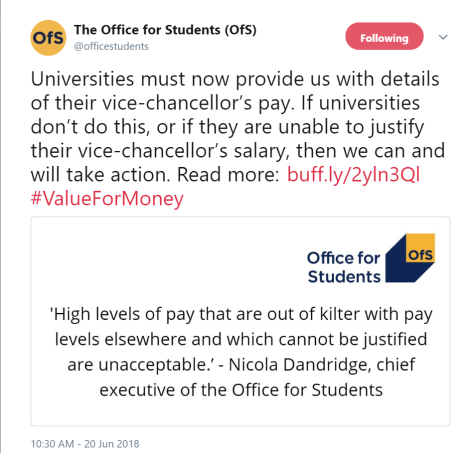 In Iowa, these assaults on university autonomy have come hard on the heels of repeated pressure to rescind tenure and end faculty collective bargaining. But in the UK, we no longer have even the nominal protection of tenure, and assaults on collective bargaining and benefits are well underway. Much of the sector is now staffed with casualized labour – exactly the kind of employees likely to police their own teaching and publications for apparent political bias. The field has been cleared for dirigiste policies.

It seems disingenuous to venerate university autonomy, as Gyimah did at the February 2018 launch of the Office for Students, when your regulatory regime is predicated on attempts to curb it. If the threat of tenured radicals has been seen off in the UK, then a new one has been installed. Not, as Gyimah might imagine, in the form of NUS militants, but in the form of a regulatory body which has control and political entryism as its priorities.

One thought on “Sam’s on campus, but is the campus onto Sam?”